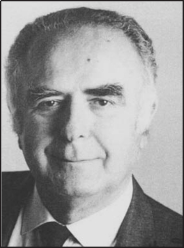 27.7.1924 Torino/I - 23.3.2003 Milano/I
\
Pier Luigi Romita graduated as a civil engineer from Roma University in 1947. He moved one year later to Milano University where he submitted a PhD thesis in 1952. His career was influenced by his teachers Filippo Arredi (1905-1989) and Giulio De Marchi (1890-1972). From 1956, Romita was a staff member of the Agricultural Faculty of the Politecnico di Milano and there was appointed professor of agricultural hydraulics in 1964. Romita retired in 1996. He was a member of the International Association of Hydraulic Research IAHR and of the International Commission of Irrigation and Drainage ICID.
\
Romita initiated his scientific career with a paper relating to the roughness pattern of large penstocks. The frictional behavior is currently described with an equation proposed by Cyril Frank Colebrook (1910-1997) and Cedric Masey White (1898-1993). However, for large tunnels that are usually drilled, additional effects have to be accounted for, some of which were investigated by Romita in his 1948 paper. In 1953 he investigated the scour pattern around bridge piers, then a research topic hardly considered. One year later, he analyzed the characteristics of solitary waves onto a permeable barrier as used in harbor design. From the 1960s he was particularly interested in questions of agricultural hydraulics including seepage, drainage where he verified the Darcy equation for conditions met in Italian soils and he applied the results to the irrigation and drainage of the Po Plain, one of the largest and most fertile plains in Europe that is harnessed almost each decade by large floods. Romita thus contributed to both the advancement to engineering science and to practical problems of his County Lombardia, in Italy.
\
Giura, R. (2003). Pier Luigi Romita. L'Acqua (3): 90-91.
Romita, P.L. (1948). Perdite di carico in grandi condotte. L'Energia Elettrica 25(1/2): 59-61.
Romita, P.L. (1953). Erosioni d'alveo al piede delle pile di ponte investite obliquamente dalla corrente. L'Energia Elettrica 30(4): 211-224; 30(6): 341-349.
Romita, P.L. (1954). Riflessione, assorbimento e trasmissione di onde solitarie in seguito all'urto contro una barriera permeabile. La Ricerca Scientifica 24(1): 86-102.
Romita, P.L., Galbiati, G.L. (1978). Improvement of irrigation methods. State-of-the-Art in irrigation, drainage and flood control. ICID Publication 1: 255-329. http://www.isral.it/web/web/risorsedocumenti/2003_romita.htm P