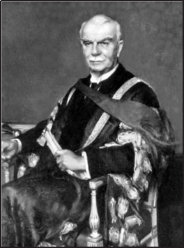 27.3.1855 Dundee/UK - 7.1.1935 Cambridge/UK
\
James Alfred Ewing was educated at Edinburgh University and came into contact with Lord Kelvin (1824-1907) as assistant in submarine telegraphy. Ewing was appointed professor of mechanical engineering at the University of Tokyo in 1878 to return five years later as an engineering professor at the University of Dundee for the next seven years. Ewing took over in 1890 as the second professor of applied mechanics at Cambridge University until 1903. During these years he developed considerable professional practice and combined research work with education. The Admiralty then introduced a new scheme of naval architecture, with Ewing as the director of naval education. Ewing remembered "… this was the most interesting episode in a life that has never lacked variety, and one feels still that it was work of real consequence." In 1917, he was appointed principal and vice-chancellor of the University of Edinburgh and was involved in the university reconstruction after World War I. He retired in 1929 to Cambridge, where he was elected Honorary Fellow of King's College.
\
In the course of his long life, Ewing did distinguished work in magnetism. Later, he added considerably to the knowledge in physics, chemistry, metallurgy and engineering. He was an eloquent, humorous and magnetic speaker, and in the closing years he delivered a series of addresses which, though historical in content, were seasoned with philosophical doubt. Ewing wrote some excellent books, including his 1894 work on Steam engines during his time in Cambridge, with a second edition in 1914 and the Thermodynamics for engineers published in 1920. It has been said at the time that it makes any other work on the subject unnecessary. Ewing also presented the James Forrest Lecture entitled A century of inventions before the Institution of Civil Engineers in 1928 and the Presidential Address to the British Association at York in 1932.
\
Anonymous (1935). The late Sir Alfred Ewing, KCB, FRS. Engineering 139: 44-46. P
Anonymous (1947). Ewing, Sir James Alfred. Who was who 3: 426. Black: London.
Bates, L.F. (1946). Alfred Ewing: A pioneer in physics and engineering. Longmans: London. P Ewing, J.A. (1914). The steam-engine and other heat-engines. University Press: Cambridge. Ewing, J.A. (1929). A century of inventions. Minutes Institution Civil Engineers 226: 387-407. Ewing, J.A. (1933). An engineer's outlook. Methuen: London.
Hilken, T.J.N. (1967). Ewing. Engineering at Cambridge University 1783-1965: 107-128. Poggendorff, J.C. (1898). Ewing, Sir James Alfred. Biographisch-Literarisches Handwörterbuch 3: 422; 4: 397-398; 5: 350; 6: 694; 7b: 1302-1303. Barth: Leipzig, with bibliography.