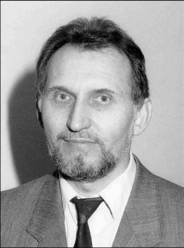 2.7.1940 /SK - 7.5.1998 Bratislava/SK
\
Ludovít Molnár graduated as a civil engineer from the Slovak Technical University SVŠT in Bratislava and in 1970 there obtained his PhD degree. After a five years' stay at the Institute of Hydrology of the Slovak Academy of Sciences UH-SAV, he took over for five other years as director the Water Resources Research Department in Lusaka, Zambia. After his return to Bratislava he continued work at the UH-SAV and was appointed in 1991 its deputy director.
\
Molnár was particularly active in the Czechoslovak and later the Slovak Committee of Hydrology, as a Secretary from 1979 to 1990, and then as the chairman until 1998. Further, he participated in UNESCO Committees and in International courses of hydrology. From 1995 he was a vice-president of the Slovak Academy of Sciences SAV. Molnar's research interest was in experimental hydrology and he founded an experimental hydrological station that specialized in high-altitude hydrological processes. He presented a number of papers on the developments of hydrology in mountainous areas and also analyzed, in collaboration with colleagues, the effects of rainfall, soil moisture and air temperature on transpiration. In parallel, he advanced the knowledge of hydrology related to the Danube River, the largest watercourse in South-Eastern Europe bordering his country close to Bratislava.
\
Molnár, L. (1970). Určenie priameho odtoku z prietokových vĺn. Vodohospodársky Časopis
18(2): 143-155.
Molnár, L. (1994). Environmental programme for the Danube River Basin - National Review of Slovakia. National Report. MŽP SR: Bratislava.
Molnár, L., Mészáoš, I. (1995). The role of ranspiration in the water balance of the Danube floodplain forest area. Journal of Hydrology and Hydromechanics 43(4/5): 288-300.
Molnár, L., Miklánek, P., Mészároš, I., eds. (1997). Developments in hydrology of mountainous areas. Technical Documents in Hydrology 8. UNESCO: Paris.
Molnár, L., Mészároš, I. (1998). Relationship of transpiration to rainfall, air temperature and soil moisture in a mountainous region. Proc. Intl. Conf. Ecohydrology of high mountain areas Kathmandu: 291-297.
Novak, P. (2005). Ludovit Molnár. Personal communication. P